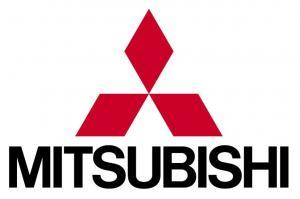 Mitsubishi's automotive origins date back to 1917, when the Mitsubishi Shipbuilding Co., Ltd. introduced the Mitsubishi Model A, Japan's first series-production automobile.[10] An entirely hand-built seven-seater sedan based on the Fiat Tipo 3, it proved expensive compared to its American and European mass-produced rivals, and was discontinued in 1921 after only 22 had been built.[11]

In 1934, Mitsubishi Shipbuilding was merged with the Mitsubishi Aircraft Co., a company established in 1920 to manufacture aircraft engines and other parts. The unified company was known as Mitsubishi Heavy Industries (MHI), and was the largest private company in Japan.[12] MHI concentrated on manufacturing aircraft, ships, railroad cars and machinery, but in 1937 developed the PX33, a prototype sedan for military use. It was the first Japanese-built passenger car with full-time four-wheel drive, a technology the company would return to almost fifty years later in its quest for motorsport and sales success.[13]

Part of Mr. Kubo's expansion strategy was to increase exports by forging alliances with well-established foreign companies. Therefore, in 1971 MHI sold U.S. automotive giant Chrysler a 15 percent share in the new company. Thanks to this deal, Chrysler began selling the Galant in the United States as the Dodge Colt (which was the first rebadged Mitsubishi product sold by Chrysler), pushing MMC's annual production beyond 250,000 vehicles. In 1977, the Galant was sold as the Chrysler Sigma in Australia.

By 1977, a network of "Colt"-branded distribution and sales dealerships had been established across Europe, as Mitsubishi sought to begin selling vehicles directly. Annual production had by now grown from 500,000 vehicles in 1973 to 965,000 in 1978, when Chrysler began selling the Galant as the Dodge Challenger and the Plymouth Sapporo. However, this expansion was beginning to cause friction; Chrysler saw their overseas markets for subcompacts as being directly encroached by their Japanese partners, while MMC felt the Americans were demanding too much say in their corporate decisions.

Mitsubishi finally achieved annual production of one million cars in 1980, but by this time its ally was not so healthy; As part of its battle to avoid bankruptcy, Chrysler was forced to sell its Australian manufacturing division to MMC that year. The new Japanese owners renamed it Mitsubishi Motors Australia Ltd (MMAL).

In 1982, the Mitsubishi brand was introduced to the American market for the first time. The Tredia sedan, and the Cordia and Starion coupés, were initially sold through seventy dealers in 22 states, with an allocation of 30,000 vehicles between them. This quota, restricted by mutual agreement between the two countries' governments, had to be included among the 120,000 cars earmarked for Chrysler. Toward the end of the 1980s, as MMC initiated a major push to increase its U.S. presence, it aired its first national television advertising campaign, and made plans to increase its dealer network to 340 dealers.

In 1986 Mitsubishi reached an agreement with Liuzhou Automotive to assemble their Minicab kei van and truck there, making Mitsubishi the third Japanese manufacturer (after Daihatsu and Suzuki) to begin assembly in China. Before receiving government approval for this project, Mitsubishi had had to express contrition over "defective" Mitsubishi trucks imported to China in 1984 and 1985.[15] By 1989, Mitsubishi's worldwide production, including its overseas affiliates, had reached 1.5 million units.

Despite the ongoing tensions between Chrysler and Mitsubishi, they agreed to unite in a vehicle manufacturing operation in Normal, Illinois. The 50/50 venture provided a way to circumvent the voluntary import restrictions, while providing a new line of compact and subcompact cars for Chrysler. Diamond-Star Motors (DSM)—from the parent companies' logos: three diamonds (Mitsubishi) and a pentastar (Chrysler)—was incorporated in October 1985, and in April 1986 ground was broken on a 1.9 million square-foot (177,000 m²) production facility. In 1987, the company was selling 67,000 cars a year in the U.S., but when the plant was completed in March 1988 it offered an annual capacity of 240,000 vehicles. Initially, three platform-sharing compact 2+2 coupés were released, the Mitsubishi Eclipse, Eagle Talon and Plymouth Laser, with other models being introduced in subsequent years.